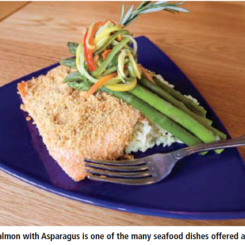 The Blue Marlin is the brainchild of owner Corey Matthews, who started cooking when he was 15 years old, opened his first restaurant at age 23, then opened the doors of the Blue Marlin Grille in 1998.

He named it the Blue Marlin because he thinks that’s a beautiful and powerful fish.

“We cater to families. People can come off the beach. You can come in here in flip-flops and sandals,” Matthews, 39, said of his restaurant.